You are alone in the middle of the wilderness, you haven’t seen another person for the last several days of trekking, and you are lost because the snow fall has covered the trail. Sometimes your feet sink so far into the deep snow that you start to panic you won’t be able to get yourself out. You are exhausted, you are hungry, it’s getting dark, and you don’t know where you can safely camp.

For many of us, this is a scenario we could never imagine encountering and yet for Kimberlie Dame, this is just another day on her 860-mile trek along the Arizona Trail. While most technomads will take a car, bus, or train to get to a serene outdoor destination, Kimberlie walks. She has undertaken a number of long treks in the USA, Scotland, and Wales but the Arizona Trail has been by far the longest. She is now in the process of preparing for a year-long journey over the Pacific Crest Trail, Pacific Northwest Trail, and Continental Divide Trail, a total of 6,950 miles. Her nomadic experiences and walking adventures teach us about the value of finding inner transformation through traveling at a slower pace.

In March 2010, Kimberlie embarked on a life changing experience: 10 weeks of walking 860 miles in isolated and rugged wilderness terrain, mostly alone, on the Arizona Trail. Prior to the start of the trip, three amazing experiences of financial serendipity occurred within a short period of time. A man, who she barely knew, gave her funding for the trip because he enjoyed her writing on trekking and wanted to support her, another individual gave her funding for a new laptop, and a buyer for her house suddenly appeared and paid her extra to have the house right away. Kimberlie was blown away by their generosity and gained a new level of self-trust with following her passions.

The trip offered encounters with incredible natural beauty, meetings with inspiring trekkers, and the opportunity to overcome extreme challenges. For most of us who have never experienced such a rigorous, unique, and long journey in the wilderness, it is hard to imagine what this trip could have been like. The experience is best described in Kimberlie’s own words shared on a blog post:

“Being out in the wilderness for an extended period of time is very similar to being incarnated into a new world through the legs of a different mother. It’s a world as dense and complex and rich and confusing and stimulating and real and peaceful and intense and enclosed as the civilly created world most of us spend our entire lives in. And I entered it as any naked infant would… Crying… At first, over the sheer physical pain and vulnerability of it… And later on for the fascination, love, and beauty of it… Everything I am thinking and feeling is right on the veneer of my skin and I react with gusto to all things real and imagined.” 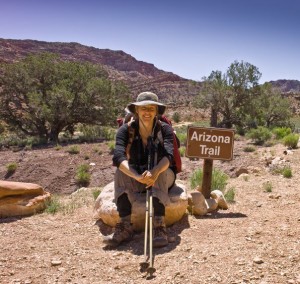 Kimberlie was forced to face her fears during this expedition. She explained, “I had to confront some pretty intense situations and I wasn’t emotionally prepared for that. By week three I had more fear than I did when starting.” For example she encountered snowstorms that covered the trail (as described above), was nearly shot by a crazed-man in the middle of the desert, and ran out of water on a 110° F day.

She found her way through such challenging situations by “coming to a place of acceptance…I was consciously choosing to believe that I was fine, even if I wasn’t fine. That was my only point of power.” She shared that there was even a moment when she came to fully accept the possibility of death. “Fear is the biggest enemy in any survival situation,” Kimberlie shared, “you make dumb choices when you are afraid.”

Walking the Arizona Trail transformed her life. “The gift of getting through it,” as she stated, was enjoying the magnificence of being so deeply in touch with the natural world. She shared that there were “moments I had just never experienced silence as such a palpable entity…you are just miles and miles and miles from absolutely everything…it’s unnerving but an incredible experience.”

By the end of the trip, she realized that she could not go back to her old life. Fortunately, an exceptional opportunity presented itself. A Scottish man Kimberlie met on the trail invited her to stay with him in his home country, an opportunity she found irresistible.  She returned to Sedona, Arizona, to sell her businesses and most of her possessions.  She packed her backpacking gear and a carry-on bag of clothes, and left for Scotland several weeks after finishing the Arizona Trail.

She had an amazing 6 months in Scotland trekking, learning about wilderness survival, and enjoying the experience of living in a new country. In February 2011, Kimberlie returned to the USA, this time settling in New York. When asked why she decided to move to NYC, she shared with a chuckle, “because that was where my plane landed.” Having run low on finances in Scotland and being open to give city-life a chance, she settled in New York to refinance, refuel her passions, and contemplate her next big trip. The past few months she has been working, exploring the city, and preparing for her upcoming year-long adventure that is planned to start in May 2012. 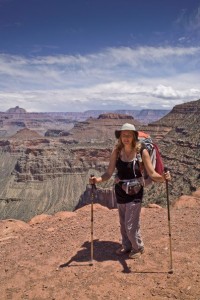 Kimberlie’s experiences walking in the wilderness have given her a great appreciation for “finding what is beautiful no matter what is being presented to me…I love having situations happen to me that have never happened before,” she explained, “and having parts of life that were previously invisible to me become visible.” She emphasized the importance of leaving behind what is familiar to experience life anew. “Stepping outside of the structure of our life for a year or 6 months or 3 months or even 2 weeks, and just having the unexpected be in front of you, does a lot for a sense of feeling alive and feeling connected to something outside of yourself.”

“Put yourself in situations you are uncomfortable with. Continually do things you would normally be uncomfortable doing,” Kimberlie advises. When faced with challenging situations, she recommends her mantra: “There is no way out but through it.” For those of us who want to create our nomadic journeys, we must face our fears and boldly go forward into the unknown. Kimberlie’s experiences offer an excellent illustration of how we can be transformed through a nomadic journey of slow travel, one step at a time.