Sometimes it’s the simple little things you feel compelled to do that turn into your greatest successes. This was the case with Charlie Grosso’s 14 year photography project, Wok the Dog, that has taken her to 82 cities in 21 countries to document the world’s diverse food markets. Charlie is a self-described “nomadic backpacker” that has an insatiable desire for adventure, travel, and photography.

Born and raised in Taipei, Taiwan, Charlie did not have the average western experience of brightly lit hygienic supermarkets. The food markets in Taipei were places that Charlie experienced with a sense of terror for their abundance of blood, cages, knives, dying animals, and suspicious strangers. As a young girl, the markets were a place where she feared that at any moment she could be snatched up by the butchers and stored in a caged to be killed just like the other animals. It was a place that haunted her until age 11 when she moved with her family to the United States.

Years later at the age of 18, she decided to return to these markets during a visit to her extended family in Taipei. She felt inclined to understand more about these places that had disturbed her childhood and decided to bring a camera along to document the experience. This was the start of Wok the Dog. Over the years, this project has grown into a deep exploration of the varying methods of production, consumption, and commerce of food and the human interactions related to them. The project has been featured in a number of exhibitions, published in magazines and journals, and received noteworthy praise. 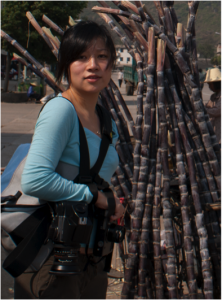 Charlie shooting for Wok the Dog in China

Charlie spends about half the year in New York working on her businesses and the other half traveling for photography. Though Wok the Dog is the focal point of Charlie’s career, she also does free lance commercial photography, and runs a touring (perhaps nomadic?) art gallery called Baang and Burne Contemporary. The gallery holds exhibitions in various people’s houses throughout New York. Their current project, 6X6, is showing 6 exhibitions (1 per week) over a period of 6 weeks. Eventually her goal is to have the gallery exhibiting shows internationally.

Charlie’s love for adventure and photography takes her all around the world, with many of her destinations specifically chosen to be part of Wok the Dog. She has travelled throughout Europe, South America, Central America, the Middle East, and Asia; one of her favorite places is Tibet. Her next destination is East Africa, where she will be traveling in the end of 2011. She regularly shares her stories and passion for travel on her blog, Spy Travelogue. She loves New York and as of now, can see herself maintaining a home base there for half the year and the other half living nomadically. Her photography business allows her to work location independent and she loves the freedom this offers.

When Compelled, Do it.

Charlie shared that one of the factors that has helped her to succeed in her photography business and nomadic lifestyle has been the act of “paying close attention to and following the things I feel compelled to do.” She explained that everyone has their own form of creativity inside of them that wants to express itself. Charlie emphasized that our responsibility is to let our creativity speak and say what it needs to say. “There is a reason for it,” she assured, and often “it’s not up to you.” Charlie advised that we must “let [our creativity] come out and don’t judge whether it is something or is not something, or if it can be monetized, or if it has value in any kind of artistic way or commercial way…let it be what it needs to be.” Charlie recognized that “part of the challenge artistically for a lot of creative people is that they shoot [their ideas] down before it has time to become anything.”

One challenge many of us face when starting a new project is that, “we prematurely kill it before seeing the bigger picture for it.” She mentioned that, “it may not be anything good [immediately] but it will probably grow into something;” the key is to give it time and be persistent with following our interests. She gave the example of her photography project, Fetal Position and Drool, which started as something she simply felt compelled to do. She had no vision for what it would turn into and didn’t even consider it an official project at first. She did it for fun and just posted the photos on Facebook. But she noticed that she continued to feel drawn to the topic. Over a seven-month period, it began to turn into a project and was eventually picked up for a publication. Similarly with Wok the Dog, it didn’t turn into an official project until 7 years after her photography of markets had began.

Charlie recognized that many times we have to strike out on our own to pursue our creative ventures. She shared that when she began taking photography seriously, her parents pressured her to choose a more secure career, like being a lawyer or a doctor. Charlie shared that unfortunately “with many jobs you are rewarded [with security] for giving up on your dreams.” Though she recognized this is a slightly pessimistic perspective, she shared that on the other side, “the things that we are taught that give us security don’t necessarily give us security. Security is an illusion”  — just look at what is happening with the current economic situation and how many people are losing their supposedly “secure” jobs. Charlie emphasized that we give up a lot when we sacrifice our creative pursuits for security. The key is to pursue our creative passions whole-heartedly and take control of our own financial security. Charlie acknowledges it takes a lot of work. She dedicates herself to succeeding with her photography business from morning until evening; “it happens when you are an entrepreneur,” she explained. But she wouldn’t have it any other way, she shared on her blog that “I was genetically programmed to be an uber-competitive overachiever.”

Often when people do strike out on their own, there are moments of frustration, lack of motivation, and social comparison. Much of Charlie’s inspiration comes from her voracious curiosity and love for new experiences, but like everyone, she has moments of exasperation. In these times, she reminds herself: “I’m not here to make great art. I’m just here to see.” When her motivation is low and lacking, Charlie advises to “go back to the basics of why you liked [what you are doing] in the first place…take away all of the things that we expect of ourselves and what we are supposed to make. Go back to…whatever it was that made you interested in that particular medium in the beginning.” Instead of comparing herself to others, she connects with her original inspiration. She shared that comparing yourself to others “isn’t productive, it doesn’t contribute to making better work and doesn’t make you feel any better.”

Charlie has created a lifestyle that allows her to pursue her passions. She shares on her blog, “I often wish I was an explorer. To sail the unknown sea, cross the desert to undiscovered countries and scale a mountain of impossible height to find the lost city.” With an impressive travel record and 19 more countries she has planned to visit for Wok the Dog, it seems that Charlie has become that explorer she has always wished to be. Charlie’s story offers an encouraging insight into what can be accomplished when you follow your curiosity and deepest longings.

At times it may feel difficult and maybe even overwhelming to know how to create your location-independent career (or even location-dependent career for that matter). Thankfully we can learn from the nomads who have gone before us. Charlie’s advice offers great insight into the hopeful possibilities that can arise from pursuing our passions: