This motto is written on Sofia’s coat of Arms. The Thracian Serdi tribe settled here in the 7th century BC and gave the first recorded name of Sofia — Serdica. The Byzantines called it Triaditsa and the Slavs – Sredets. The modern city of Sofia was named in the 14th century after the basilica St. Sofia. In Greek, the word sofia means wisdom.

Today there are many archaeological sites in Sofia that display the city’s diverse history – the castle gates and towers of Serdica, public buildings and streets are thousands of years old. A large part of the ancient city of Serdica is underneath important modern buildings. The ancient city council (bulefteris) is hidden under the “Sheraton” hotel, while a number of basilicas are below the National Historical Museum. The Roman thermal baths are under the Sofia Mineral Baths and a Roman residence with elaborate mosaics is below the “Rila” hotel. 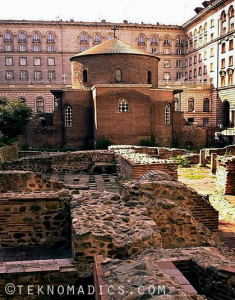 Rapidly the city’s image changed from an Oriental, to a European. Today many streets, buildings, parks, and even whole neighborhoods preserve the architectural style from the turn of the century. Between 1879 and 1939, the population of Sofia grew from 20 000 to 300 000, while today 1 250 000 people live in Sofia.

Since ancient times the city was famous for the abudance of cold and thermal mineral water springs in and around it. The water is still available today and is praised for its numerous qualities. Springs may be found in the city center, as well as in the neighbourhoods: Kniazevo, Gorna Bania, Bankia, Ovcha Kupel and Ivaniane.