What is the one thing you’d rather not be caught without on the road? 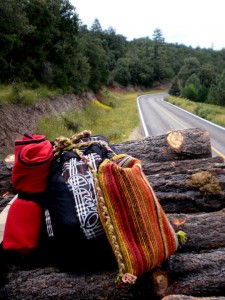 Hopefully, you have a warm jacket and a good pair of shoes to help you along the way, and maybe a swimsuit in case there’s an opportunity to hop into a body of water! A laptop, a camera, an mp3 player, and an external hard drive are common tech-nomadic items you may pack for the road. The big stuff is usually covered, but what about the little things we sometimes forget about?

We asked a group of technomadic backpackers, hitch-hikers, couchsurfers, and experienced travelers: What is the one thing you’d rather not be caught without on the road? Aside from the hi-tech devices that are key, here are the top 5 low-tech items our experts recommend you bring on your adventures.

For the environmentally minded, the one-time use plastic bottle is a thing of the past.  You often found yourself buying a new one every time, and when thrown away and not recycled, they would usually end up sitting in a landfill forever (or eventually carried by the ocean currents to a Garbage Patch somewhere). 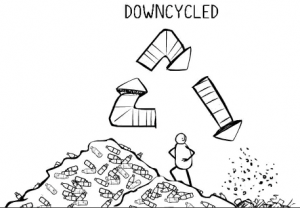 Health-wise, it is important to note that plastic bottles contain a chemical called Bisphenol A. When this chemical leaks into the water, and is consumed, it appears to mimic the effects of estrogen, interfering with hormone levels and cell signaling systems. If you can’t use glass, “stainless steel water bottles are best,” says Donna, who is currently living in Chico, California. “I Love Kleen Kanteen because it’s from Chico, but there are many other brands out there. Anything is better than plastic!” The effects of Bisphenol A on the human body are currently not fully understood, but studies have shown that people exposed to high levels of BPA have a greater risk of developing uterine fibroids, breast cancer, decreased sperm counts, and prostate cancer. Babies and children are thought to be at greatest risk from the exposure. “No one needs any more hormonal interference, seriously,” says Donna.

For those practical types, it is also much easier and economic to get your water bottle refilled, and lets face it – if you don’t drink water you will eventually die!  So let’s just say that this one is a win-win for humans and nature.

[We recommend you check out this video from the folks at the Story of Stuff Project, to get an even better idea about how detrimental the plastic bottle habit is for the world.]

(It used to be Vaseline, but we are Saying No to toxic petroleum products!) 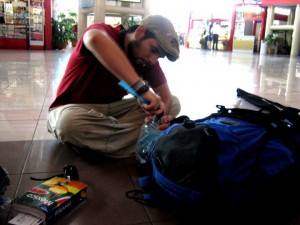 It’s a small item, but it could go a long way. “Man, I hate being without that!” says Carissa, who is currently studying in Madrid, Spain. “Usually, I just use it to prevent cracked lips, but it’s also great as a temporary fix for cuts or super dry skin. It can even be a sort of emergency WD40. Pretty much, it’s something I like knowing I have!”

This is a technomad no-brainer. You never know when you might need one, and having one handy could literally save your life.  If you can, try to snag a waterproof one, to cover all your bases. Also as a tip, “turn the flashlight’s batteries around so that if it’s accidentally turned on while traveling, you won’t empty the batteries,” says Ricky, who is currently in Tijuana, Mexico. “Don’t forget to turn the batteries back around when using the flashlight though!” he says.

Its’ not fun to talk about, but sometimes when you eat foods and spices that your stomach is not used to, it is possible to get Diarrhea (or Montezuma’s Revenge if you’re traveling in Mexico!). “If you’re on the road for a while, and you visit a lot of countries and sometimes eat at dodgy places; you’re bound to get it,” says Mathieu, who is currently in Montreal, Canada. “It might just happen in the middle of a 12-hour dusty bus ride in Cambodia. It did to me anyway, and I was so happy to have a dose on me!” He adds that you should keep it handy,  “not all the way down your backpack that’s tied up on the roof of the bus… No, have that stuff near you!”

For those who don’t like medications, there are several natural remedies if your condition is not too severe. Depending on where you are traveling, and what items are readily available, you might be able to get better naturally. In all cases though, make sure you are drinking lots of water. If your condition worsens, consult a physician right away, as it could be serious!

[Please Note: Some drugs available by prescription in the US are illegal in other countries. Check the US Department of State Consular Information Sheets for the country(s) you intend to visit or the embassy or consulate for that country(s). If your medication is not allowed in the country you will be visiting, ask your health-care provider to write a letter on office stationery stating the medication has been prescribed for you.]

Not a gadget you’d associate right away with a technomad, but essential since we’re still basically nomads, and sharp things help get a lot of stuff done! “After a few years on the road, having lost everything before, and changing travel styles, the only luxury I really like to have is a pocket knife,” says Taylor from Nothing Held Back, who’s been backpacking since 2004 and is currently traveling through Southeast Asia on his way to Australia. “It is so handy.  A compass is a close second, but I definitely feel a bit out of sorts when I don’t have a knife. “ You may be wondering if carrying a pocket knife around might cause you problems with authorities. “Rule of thumb anywhere in the world is,” he says, “as long as the blade is less than the width of your palm, you should be alright. And that’s if you’re on the street. Borders you should be able to cross with bigger. I’ve never had a problem. A mate bought a tribal sword in Vietnam, and that did cause some problems at the airport,” so always double check before you buy!

In the end, however, you really can’t be prepared for every possible situation you will encounter on your travels. “The most important thing to have with you is love in your heart,” says technomadic singer/songwriter Malika Sellami, who is currently traveling through South America. “If you’ve got that, the rest will manifest itself!” 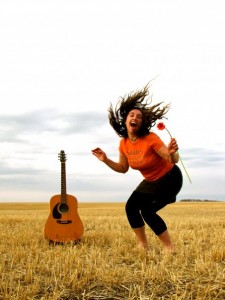 Malika recalls a time she was hitch-hiking with a friend through Oregon on her way to the Burning Man Festival in Nevada. After hours of walking in the heat with no luck, nearly dehydrated, and losing hope, they decided to take a break. “We sat in the shade by a tree, and I decided to rewrite our sign. This time I made it bolder, nicer, and drew little tiny hearts around the letters.” Her friend asked her, “Do you really think people will see that?” “Probably not,” she said,  “But I’m sending love to them; I am manifesting a ride with positive energy!” She then began to sing, and a few minutes later, someone pulled over. “She stopped, but pretty far ahead of us, like she decided to last minute!”

After about 8 hours on the road with her ride, Malika says the most wonderful thing happened. “When she got near her mom’s house, she invited us to stay the night. We ended up staying with them for a couple of nights and then touring San Francisco with her mom.  We had the greatest time! They eventually drove us all the way to Sacramento, they really helped us out a lot.” She says this is not an uncommon experience, “I have tons of stories like that; I love the road. It’s so unexpected and full of little manifestations of love!” Her latest album not coincidentally titled “Manifest Some Love,” is now available for download online.

There’s no telling what you will encounter in your travels. “I have traveled and hitched all over these continents – all over the globe,” she says. “Sometimes you can’t be prepared for what might happen on the road, but with a good attitude anything is possible. You will always find a kind soul to help – or even someone that needs yours.”

Don’t forget to stuff a little love in your backpacks, as you’re getting ready for your next adventure!