Mycologist Paul Stamets studies mycelium and lists 6 ways that this astonishing fungus can help save the world. Cleaning polluted soil, creating new insecticides, treating smallpox and maybe even the flu … in 18 minutes, he doesn’t get all the way through his list, but he has plenty of time to blow your mind. An audience favorite at TED2008.

“Fungi are the grand recyclers of the planet and the vanguard species in habitat restoration,” says Stamets, who predicts that bioremediation using fungi will soon be a billion-dollar industry. “If we just stay at the crest of the mycelial wave, it will take us into heretofore unknown territories that will be just magnificent in their implications.”

Researchers at Dundee Unversity in the UK have determined that fungi can block uranium from finding its way into plants, animals or the water supply. Scientists have found that what they call free-living and plant fungi can, “colonise depleted uranium surfaces and transform the metal into uranyl phosphate minerals.”

That action helps prevent uranium uptake by plants, animals and microbes, although there would still be some threat involved. Researchers said the minerals produced by the fungi are capable of long-term uranium retention.

“More recently, at Einstein University, they just determined that fungi use radiation as a source of energy, much like plants use light,” says Stamets.

The mycelium absorbed the oil, and became saturated with it. When he returned 6 weeks later, all the tarps were removed, all the other piles were dead, dark, and stinky. “We came back to our pile,” Stamets says, “and it was covered with hundreds of pounds of oyster mushrooms.”

“The [mushrooms] sporulated, the spores attracted insects, the insects laid eggs, eggs became larvae. Birds then came, bringing in seeds, and our pile became an oasis of life.”

Whereas the other 3 piles were dead, dark, and stinky, and the PAH’s — the aromatic hydrocarbons — went from 10 thousand parts per million to less than 200 in 8 weeks. The entire pile was a green berm of life. “These are gateway species. Vanguard species that open the door for other biological communities.” 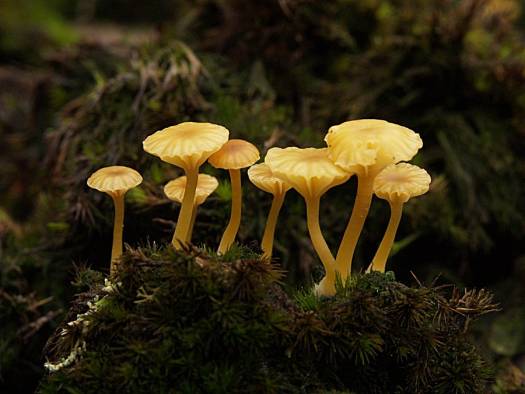 Stamets did an interview on NPR where he discusses the anti-viral properties of mushrooms. “We have three different strains of Agaricon mushrooms that were highly active against pox viruses. Dr. Earl Kern, who’s a smallpox expert of the U.S. Defense Department, states that any compounds that have a Selectivity Index of 2 or more are active, 10 or greater is considered to be very active. Our mushroom strains were in the highly active range.”

“We have 3 different strains of Agaricon mushrooms highly active against flu viruses. Here’s the Selectivity Index numbers — against pox, you saw 10s and 20s — now against flu viruses, compared to the ribavirin controls, we have an extraordinarily high activity. And we’re using a natural extract within the same dosage window as a pure pharmaceutical. We tried it against flu A viruses — H1N1, H3N2 — as well as flu B viruses. So then we tried a blend, and in a blend combination we tried it against H5N1, and we got greater than a thousand Selectivity Index.”

These amazing findings about the effectiveness of mushrooms against viruses  now “make the argument that we should save the old growth forest as a matter of national defense,” says Stamets.

Fungi as a Natural Pest Control:

“I became interested in entomopathogenic fungi — Fungi that kill insects. Our house is being destroyed by carpenter ants. I went to the EPA homepage, and they were recommending studies with metarhizium species of a group of fungi that kill carpenter ants, as well as termites.”

The end result was his discovery of a now-patented pesticide technology that takes advantage of chemical cues produced during one stage of the life cycle of the green mold fungus Metarhizium anisopliae to attract carpenter ants and other insect pests and infect them with the fungus, which later kills them. An additional benefit is that chemical cues produced by spores in a subsequent stage of the fungal life cycle help shoo ants and other insect pests away indefinitely.