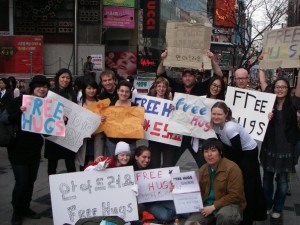 Medical research is popping up everywhere to support the notion that physical touch is healing, and as a result people are paying for a selection of different touch therapies.  Here’s a wild notion–quit shelling out dough, and open your arms!  In this age of social disconnectivity and lack of human contact, the effects of the Free Hugs campaign is phenomenal. Read more about hugging and how to become a master at it here.

Says Who?
A man had been living in London when he got kicked out and had to to return to Sydney.  He had no one to welcome him back, no place to call home.

As he stood there in the arrivals terminal, watching other passengers meeting their awaiting friends and family, with open arms and smiling faces, hugging and laughing together, he wanted someone out there to be waiting for him.  To hug him.

So he got some cardboard and a marker and made a sign. He found the busiest pedestrian intersection in the city and held that sign aloft, with the words “Free Hugs” on both sides. Check out the Free Hugs Campaign to learn more about the story of Free Hugs!

Everyone has problems but to see someone who was once frowning, smile even for a moment, is worth it every time. 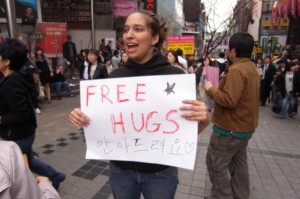 Back when I worked in the service industry, I was often thanked by customers.  For what?  For asking “How are you?” and sounding like I meant it (I usually did), for wishing them a nice day and sharing a genuine smile.

Some people remind me of robots as they drudge through the routine, becoming more and more like the electronics they are addicted to.  Maybe, if we could return to acknowledging our feelings (good, bad, everything in between), then we would have less problems…and if not, well its a great place to start trying 🙂

Check out this cool video from our free hugs event!