“It is not our differences that divide us.  It is our inability to recognize, accept, and celebrate those differences.”
–Audre Lorde

I remember learning about division, in third grade, right after we had our multiplication tables down pat. However, at the time I didn’t really know what division meant; I didn’t realize I was being divided from everyone around me, purposefully, methodically. I didn’t realize how ingrained it is in our culutre, how it is conditioned into us from the very beginning.

Divide and conquer, a famous strategy by the victors of war, those whom inevitebly write the history books.  They found ways to fundamentally divide the people.  Once separated from one another, the people become weak, whereas, together as one they were much stronger.  Over the years our society’s influence on individualism has broken down many of the ties of communal living that strengthened us in the past.  Wasn’t it more acceptable 20 years ago to ask the neighbor for a cup of sugar?  Now we are expected to run to the closest grocery and provide for ourselves.  We are made to feel as though real success only comes when you aren’t dependent on others.  This simply isn’t true.  We are here to commune!  In other cultures, entire families live together under one roof.  Ten people may seem like alot, but we know it takes a village!  Together we can do much more than we can alone.  Our society makes us feel as if we’ve accomplished something when we can be out on our own, so we live inside our own little box with many little boxes inside of it that have been filled with plenty of divisive devices like televisions and video games to keep us occupied.  On public transit, we often plug into headphones rather than share stories with the heart that’s beating beside us.

What does this division do?  It drives competition and makes us more lonely.  As much as individualism is esteemed as a high virtue in this society, we try to be unique and different, and it isolates us instead of uniting us. Freaks and Geeks, a club I was in at university, focused specifically on uniting people through our differences.  By embracing our uniqueness and allowing it to bring us together into a sort of melting pot, we all came together and shared our passions and interests. It worked.

Unity is the key. Oneness.  Once people realize that we are all in this together, we can finally work together, and that may finally bring a shift in consciousness.   We are beginning to realize that the material possessions are nowhere near as important as the people in our lives, even the ones we have never met.  All struggles are the same, they are all connected; the common theme is struggle against hierarchy.  The shift can happen, it is already beginning with community gardens and with this great depression that some people are feeling.  As people wake up to the reality that they can not depend on their government to provide everything that they need, the truth of communion reveals itself. 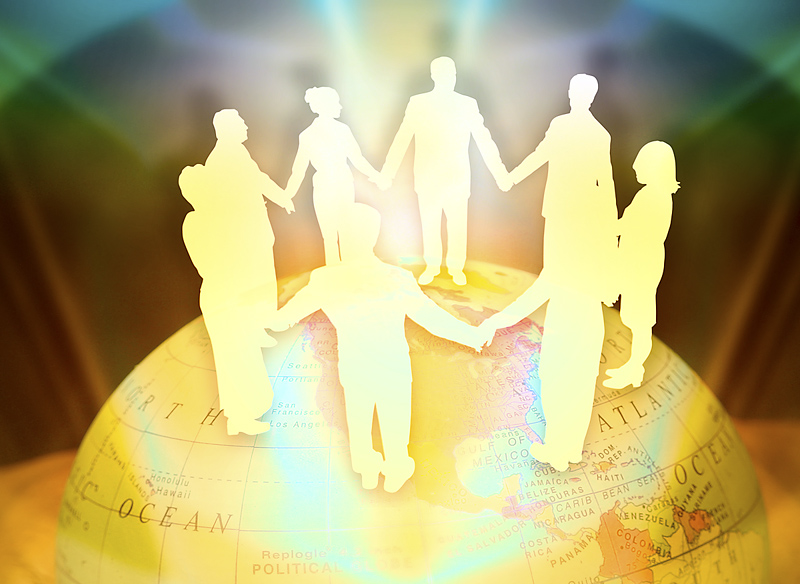 I used to think that the only real thing necessary to improve the world was to get rid of the greed within it. But I realize that, along with many other fundamental steps of decency, treating each other as we want to be treated will be ushered in with Unity.  If we can see each other as true equals, as one and the same, we begin to remember that to hurt another person is to hurt one’s self.   Competition is needless.  Things like war becomes absurd, borders seem ridiculous and hilarious, as do fences and all of the other divisive measures in this world.  Unity will be the one deciding factor. The idea of an emerging evolutionary consciousness, Oneness, is based upon this.  That we really are all truly connected on such a level greater than we can fathom, this is the true reality, the one great secret that has been kept from us by those people that wish to dominate us, divide and enslave us and run the planet through our complacency and feelings of helplessness and weakness.  Because after all, what can just one person do?  This secret has already been revealed to us by many prophets; all we really need to do is listen, to open ourselves up to this unification; not that it will remove our individuality, it will unite our differences!

So stop reading this, get out there and make a connection with a neighbor, have a community event, and for survival’s sake GROW YOUR OWN FOOD! If you think you are too small to make a difference, try sleeping with a mosquito!