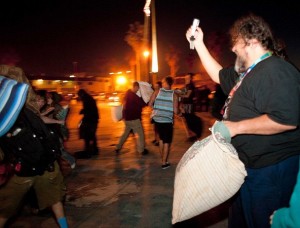 Making its way back around to the US, a massive Pillow Fight is being planned for 6pm on Valentine’s Day (February 14th) and San Diego is joining again this year!

The beauty of the many San Diego events is their variety, as they range from the grand to the just plain silly, but fun nevertheless. This will be the third year we do this, and we are excited to see some awesome pillow fight action! Last year, our friend Bear, a.k.a the Double Rainbow Guy from YouTube, came to join us and it was EPIC! Who knows who might show up this year!

We’ve set the location to return to its EPIC start in 2009 – Horton Plaza Park in Downtown San Diego! arrive at 5:30 PM to start at 6PM — This location is great as it’s central and convenient for folks all around the county, and there will be many unsuspecting viewers out on romantic dinners! hehe.

Read the RULES to the BOTTOM RIGHT! >>

In the meantime, check out the video from the last Valentine’s Day Pillow Fight!!

Here is video from the first one!

All over the world, groups organize free, fun, all ages, non-commercial public events. From a massive Mobile Clubbing event in a London train station to a giant pillow fight near the Eiffel Tower in Paris to a subway party beneath the streets of Toronto, it is clear that the urban playground is growing around the world, a playful part of the larger public space movement.

One of the goals is to make these unique happenings in public space become a significant part of popular culture, partially replacing passive, non-social, branded consumption experiences like watching television, and consciously rejecting the blight on our cities caused by the endless creep of advertising into public space. Even more so in the case of “Hallmark” holidays like that of Valentine’s Day.

The goal is to create a global community of participants, not consumers, in a world where people are constantly organizing and attending these happenings in every major city in the world.

So…who’s up for a pillow fight? We will gather at a designated location at 6pm, and at the sound of the whistle – PILLOW FIGHT!! Those who don’t have anywhere to be can get together for a fun night out after!

Here’s more on the history of the Pillow Fight Club