Mark Victor Hansen talks about how Better Place is changing the world of transportation – Leaders Causing Leaders Conference: LeaderSHIFT 2010: Watch it on YouTube

Palo Alto, Calif. – (October 27, 2010) – Better Place, with support from the U.S. Department of Transportation via the Metropolitan Transportation Commission, today announced a commitment to bring a switchable battery, electric taxi program to the Bay Area in partnership with the cities of San Francisco and San Jose to further cement the region’s position as the “EV Capital of the U.S.”

Taxis are a high-mileage, high-visibility segment that can serve as the on-ramp for technology transfer to the mass-market. Over the next three years, the program will deploy and operate four battery switch stations in the San Francisco to San Jose corridor that supports a fleet of zero-emission, switchable taxis. This fleet will offer many thousands of Bay Area residents and visitors their first EV experience. The program also has the potential to help California and the Bay Area meet their aggressive energy and climate policy goals when scaled to the entire region. 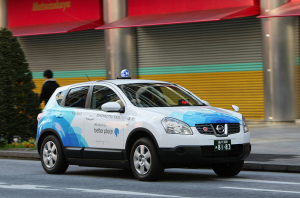 Electric taxis are the gateway to clean cities. While gas-powered taxis are fewer in number than personal cars, these high-mileage vehicles are disproportionally responsible for harmful greenhouse gas (GHG) and other tailpipe emissions, so electrification of this fleet is essential to making a real impact on air quality and oil consumption. Since taxis drive nearly continuously, they require instant charge of their battery to maintain quality of service and continue serving the public. Given the taxi business, waiting three to four hours for standard charge is not an option. Battery switch is the only option that allows the driver to recharge in less time than it takes to refuel, the means of range extension for today’s gas-powered taxis.

Better Place has been successfully operating an EV taxi program in Tokyo, supported by the Japanese government. The pilot project began on April 26, in cooperation with Nihon Kotsu Co., Tokyo’s largest taxi operator, and focuses on the feasibility of an automated battery switch process as means for taxis to have instant, zero-emission, range extension. In the first 90 days of the trial, the EV taxis drove over 25,000 miles using battery switch as the primary means of “instant charge” or range extension.

“Today marks a significant milestone in our march towards accelerating the mass adoption of electric cars in the Bay Area. This program will enable us to reach a broad audience and demonstrate a solution that offers drivers a more convenient option than today’s gasoline cars,” said Jason Wolf, VP of North America for Better Place. “The battery switch model is gaining momentum globally. Our Tokyo EV taxi program has proven to be an example to major metropolitan areas around the world, and we are pleased that the MTC recognized this and the Bay Area is taking a leadership position in the U.S.”

This program will be developed in partnership with key regional stakeholders and organizations that are working together to build Bay Area EV leadership, including:

“In November 2008, I was joined by Oakland Mayor Ron Dellums, San Jose Mayor Chuck Reed and Better Place in calling for making the San Francisco Bay Area the EV Capital of America,” said San Francisco Mayor Gavin Newsom. “This partnership with Better Place to build the first electric taxi program with switchable battery EVs in the U.S. helps make this a reality.”

Better Place remains on-track in developing and deploying countrywide networks of charging and battery-switching infrastructure in its first two markets, Israel and Denmark, for commercial launch in late 2011. Better Place will begin its initial network deployment in Canberra, Australia in late 2011 as part of a nationwide infrastructure roll out. Learn more: http://betterplace.com