“It is wonderful to watch Khao Sok cast its spell on people…those magical mornings when the world seems new like the dawn of time and gibbon songs echo in the morning mist.” – Thom Henley, Waterfalls & Gibbon Calls (the ultimate guide on Khao Sok)

Towering, sharp, lime stone cliffs protect the area, and are remnants of a time long ago when they were part of a coral reef system that stretched all the way from Borneo to China some 225-280 million years ago. The dramatic topography of the park is stunning, with its tallest “karst” reaching an impressive 960m. With its thousands of species of plants and animals, Khao Sok contains a true natural treasure and sanctuary of life.

Read more about Khao Sok National Park and our adventures: 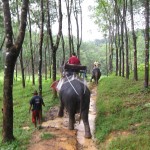 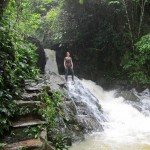 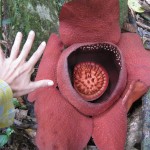 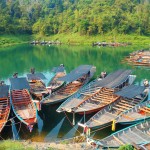 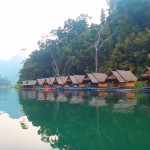 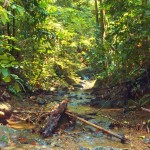 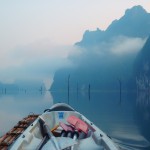 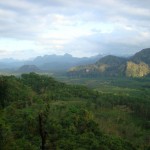 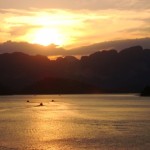 Sunset over the lake – photo by Jungleman Khao Sok

One of the most interesting areas is the stunning Cheow Larn Lake (Ratchaprapa Dam) in the heart of Khao Sok National Park. It’s dark history often passes by unnoticed to most tourists who are overcome by its beauty. The artificial lake was created in 1982 with the damming of the Pasaeng River, the largest watershed in the south of Thailand. It’s creation displaced many of the locals, whose homes now lie at the bottom of the lake. Many of them now own the raft houses that float above where their homes used to be. In fact, there are diving expeditions you can go on to explore what lies beneath the lake!

“Khao Sok National Park is one of the best preserved natural habitats in Thailand, and it’s all thanks to the Communists. During the 1970s and early 80s, this area of thick jungle and caves was the perfect hide-out for the small band of Communist insurgents.

A Peace Corps volunteer named Dwaila, a farm girl from Iowa, was the first to move there. She lived in a basic bamboo hut at the edge of one of the massive limestone cliffs. One day she was sitting in a coffee shop when somebody joined her and started asking lots of questions. She later learned that he was the Communist chief and, after the interview, had decided to let her stay there.

Unlike Dwaila, loggers and other developers were not welcome by the Communists so they left the place alone and the forest was still there in 1980 when Khao Sok faced its next life-threatening challenge. The rows of steep limestone cliffs made the trees inaccessible, but UN Food and Agriculture Organization (FAO) proposed a system of aerial logging to get it out.

A far-sighted Forestry official named Thani Pamornniyom saw greater, long-term benefit in leaving it alone and out-maneuvered the would-be loggers by having it all declared a national park.”  Source: Who Saved Khao Sok and The Luxury of Nature

Though branded as commies, these rebels were actually pro-democracy students from some of Bangkok’s most prestigious universities. They had taken to the streets to protest a military dictatorship in the country at the time, but fled to the forest following a Bangkok student massacre in fear for their lives. Flooding the valley that harbored these fugitives was seen as the fastest way of driving them out of hiding. We recently met a young man whose father had been part of this, and he confirmed the story!